Lovely bedding that coordinates beautifully with the fushia bottom sheet. Not particularly soft until washed s few times but fine after that. Good colour fastness

Gorgeous bedding which is perfect for our spare room. Once washed feels fresh and good quality for the price. Colour is not fading at all. Very pleased with this set.

Bought for my living room looks and hangs great, I am very happy with them.

This duvet is beautiful

This product surpassed my expectations . They are well made easy to hang. AND Absolutely beautiful . My visitors all love them too 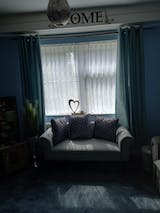 Bought the fitted sheet and pillow cases to go with a new duvet set made by Drift. They are really good quality and was well. Like that they are environmentally friendly and utilise recycled materials. Very good buy and good value for money

Really like this simple design and love that it is eco-friendly. Washes really well and needs minimal ironing…always a bonus. Would definitely recommend.

I would not recommend this duvet set, It is poor quality and keeps clicking.

Happy with these coasters very pretty

I like this duvet so much that i bought another one and the matching throw It looks so smart, and is so comfortable, lovely material, washes well, I definitely recommend

Delighted with the cushion covers. Excellent quality for excellent price. All arrived within a week of purchase. Would definitely recommend this company.

Very pleased with my purchase.
Curtains look exactly like the picture and are well made and great value for the price.

Very happy with this set. Modern and perfect for my teenage boys room. Excellent quality. Thank you ideal!

A good blind. The right size, and better quality than I expected..
However, when it arrived, after a delay, it was broken in more than one place, and unusable.
The carriers had broken it in transit.
So I requested a different carrier for a replacement blind. Not possible apparently.
I was sent a second blind…same quality.
It also was broken beyond being useable…….damaged in transit again.

So I have sent them to the tip, and have received a quick repayment of my money.

So unless the Company change their Carrier Company, and/or parcel the items up to protect them against the blunt force exerted on them in transit, then think twice before ordering!

I'm delighted with my purchase. The order came quickly as stated. The colour wasn't quite as bright as it looked online, but it's fine. The material needed a couple of washes, to soften well. But it needed very little ironing. I would recommend Ideal and the quilt cover.

Absolute rubbish the plastic split on the 1st bit I tried to put together. Rang up to complain and was told to send photos. Cant do that. Would have to pay postage to return it. Asked for a form to return it, said they would send one to print off but I havent got a printer. Very unhelpful I just gave up in the end and bought one from somewhere else which went together with no problems. Wouldnt buy anything else from this company.

asked for a form to return but would send me one to print off. Havent got a printer. I gave it up as bad job. Wouldnt buy anything from them again

We are sorry you had a problem with your order.

Our returns label we offered you could either be printed or Royal Mail would provide you with a QR code that would allow them to print it for you.

I love these curtains so much! Much cheaper than I found anywhere else and came when they said. Look great

Hi - these are a very different colour to the photos and much ‘yellower’. Will be returning.